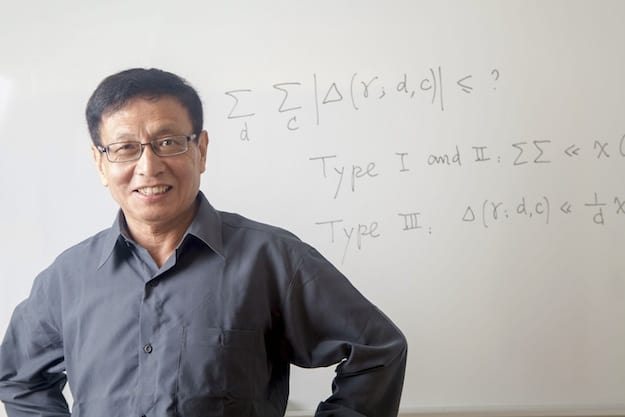 Zhang began to work on bound gaps (as it’s often called) in 2010. He didn’t find his “door” into the problem until the summer of 2012, when, standing in a friend’s backyard in Colorado, smoking a cigarette and watching for deer, he finally saw a way to penetrate its knotty interior.

In that two year period, between when Zhang started on the problem and had his first breakthrough, he spent much of his waking life simply thinking. Here’s Wilkinson’s description of Zhang’s “method”:

A few years ago, Zhang sold his car, because he didn’t really use it. He rents an apartment about four miles from campus and rides to and from his office with students on a school shuttle. He says that he sits on the bus and thinks. Seven days a week, he arrives at his office around eight or nine and stays until six or seven. The longest he has taken off from thinking is two weeks. Sometimes he wakes in the morning thinking of a math problem he had been considering when he fell asleep. Outside his office is a long corridor that he likes to walk up and down. Otherwise, he walks outside.

I don’t have a piece of pragmatic advice to extract from this story. Most people cannot spend two years thinking about the same thing for ten hours a day, and it wouldn’t help their professional life much if they did.

38 thoughts on “From Obscurity to Genius: The Deep Life of Yitang Zhang”