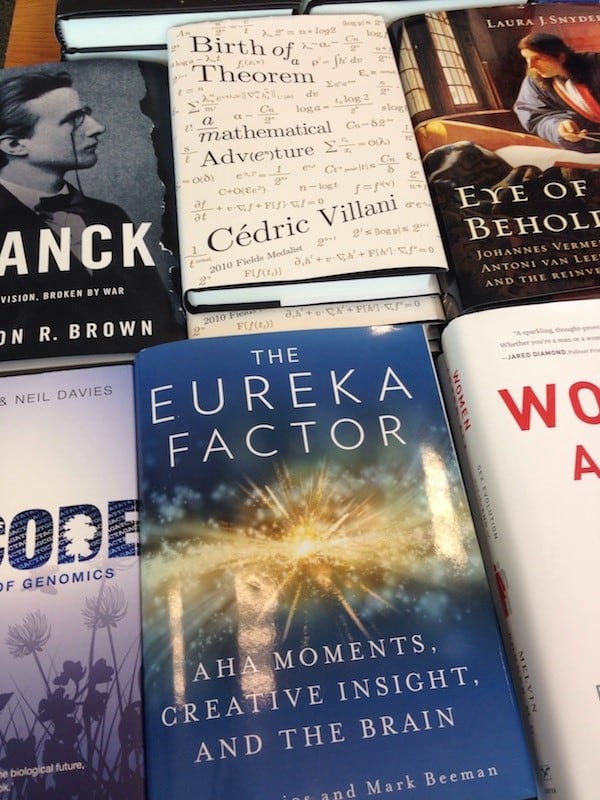 Mlodinow tells this story as one of many examples of scientific discoveries incorrectly portrayed as the result of sudden insight. (He also places Darwin’s finches and Newton’s apple in this category.)

There are many lessons that can be drawn from Mlodinow’s article, but there’s one in particular I want to highlight here: we need to rethink creativity.

This idea came to me soon after I read Mlodinow’s op-ed. Later that morning I was at Barnes & Noble, still thinking about his points, when I saw the table display pictured above.

The two books placed right next to each other on the display, I realized, capture a fundamental rift in our culture’s thinking on creativity.

The bottom book, titled The Eureka Factor, explains, among other things, how to setup your environment to be more “conducive” to generating “creative insights” of the type portrayed in The Theory of Everything.

The top book, titled Birth of a Theorem (which I bought and read this weekend), is written by the french mathematician Cedric Villani. It tells the tale (without undue exposition or elision) of how he came to solve the theorem that won him the 2010 Fields Medal.

The former promotes a Don Draper style story that we like to hear: if you’re willing to open yourself to your own genius, you’ll have eureka moments that change your life.

The latter paints the Stephan Hawking style reality of what produces real creativity: hard won skills are put to work in a painstaking, obsessive way to uncover, one cognitive brush stroke at a time, something fundamentally new.

In an economy where creativity is becoming both more important and complicated,  I suspect we need to abandon the old ways of thinking about this type of thinking, with its conference room brainstorming sessions and markers on butcher paper, and instead discover what scientists knew along: creativity is hard, highly skilled work that is often quite unromantic in its execution, but is ultimately a source of deeper satisfaction than any short-lived eureka moment could ever deliver.

40 thoughts on “The Eureka Myth: Why Darwin (not Draper) is the Right Model for Creative Thinking”