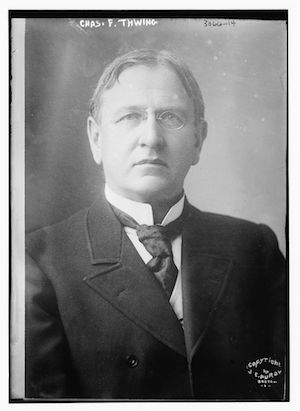 Charles Franklin Thwing is a largely forgotten but impressive figure from the early twentieth century. He graduated Harvard in the 1870s, entered seminary, became a pastor in Massachusetts, then an academic, eventually ending up president of Western Reserve University.

He came to my attention because of a book he wrote in 1912 titled, Letters from a Father to his Son Entering College. In this insightful volume is the following wisdom:

“To save time, take time in large pieces. Do not cut time up into bits…The mind is like a locomotive. It requires time for getting under headway. Under headway it makes its own steam. Progress gives force as force makes progress. Do not slow down as long as you run well and without undue waste. Take advantage of momentum. Prolonged thinking leads to profound thinking.”

Thwing, it seems, was a disciple of deep work a century before the term was coined. Good ideas, I suppose, are timeless.

Hat Tip to Morry, who turns 80 next month, and who brought this book to my attention. Morry, inspired by Thwing, has followed this advice for decades by deploying 4 hour stretches of deep work to get important things done.

The Killer App of the Knowledge Economy

I wanted to share some brief updates about how my new book, Deep Work, is faring since its release a couple weeks ago. It seems to have hit a nerve. This excites me — not just because it’s good news for my book, but because I think it points to a bigger shift in our cultural conversation. People seem increasingly ready to move past self-deprecating humor about how they check their phone too much, and instead seek concrete changes that will improve their cognitive life.

Anyway, here are some highlights from the book launch:

If you want to learn more, read my original post about the book launch. In addition, my publisher has posted two long excerpts. The first is about how deep work helps make you massively more productive and the second tackles the inanity of open offices.

I am, of course, most grateful for your support here over the years as I developed these ideas. I can’t thank you enough.

Now back to our regularly scheduled programming… 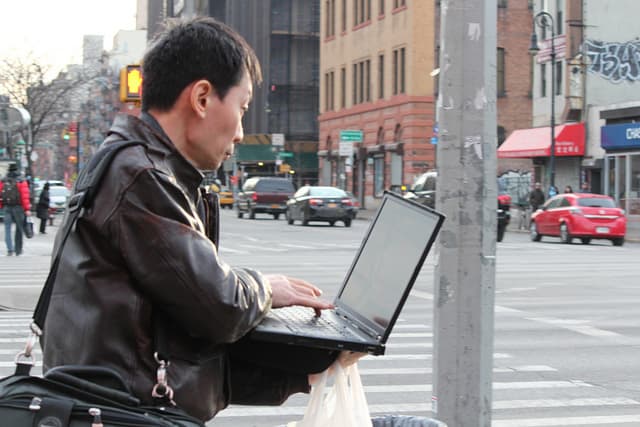 The Attack of the Inbox

Not long ago, I was listening to Pat Flynn’s podcast. Pat is an excellent podcaster, so it doesn’t take much to convince me to listen, but this time I was particularly interested because the episode title caught my attention: 9000 Unread Emails to Inbox Zero.

Pat tells the story about how his email inbox grew along with the success of his online brand. He used to try to empty his inbox. After a while, he began to consider “only” 100 unread messages as a victory. Then, one day, he looked up and his inbox had expanded to 9000 unread messages.

Something had to give.

Pat’s solution was radical: he hired a highly-trained executive assistant who could devote many additional hours to sorting through the communication deluge before it reached Pat. He still spends a lot of time on email, but at least now it’s tractable.

Longtime readers will not be surprised to learn that the subtext of this story depresses me.

I am, as you know, a big proponent of deep work — as I think this activity can produce a professional life that’s both successful and deeply meaningful. But as Pat’s experience seems to attest, our current digital economy has perverse incentives: forcing you, it seems, to fragment your time into increasingly small, anxious slivers as recognition for your skill grows.

To me, the idea of needing to hire assistants to increase the amount of one-to-one communication you can fit into a single day is, to steal a relevant phrase from George Packer, a truly “frightening vision of the future.”

But then Brett McKay came along and gave me hope…

END_OF_DOCUMENT_TOKEN_TO_BE_REPLACED 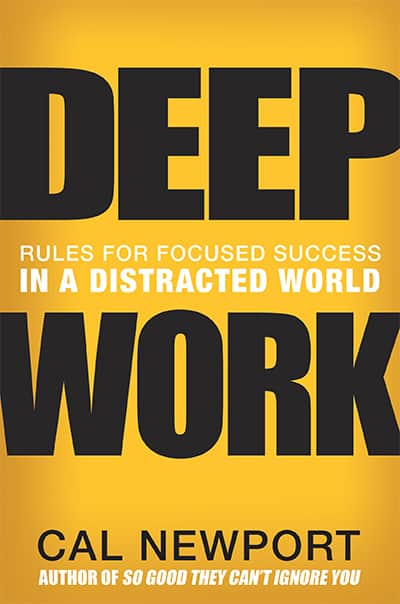 It’s official, today is the release of my new book, Deep Work: Rules for Focused Success in a Distracted World.

The book argues that deep work (focusing without distraction on a cognitively demanding task) is becoming more valuable in our economy at the same time that it’s becoming more rare.

The implication: if you’re one of the few to take advantage of this trend and cultivate a deep life, you’ll thrive.

Not only will you produce at quantity and quality levels that stun your peers, you’ll also find your work more meaningful and less exhausting.

To make this claim more concrete, consider me as a case study. As a longtime devotee to depth, I’ve been able to publish close to 50 peer-reviewed papers as an academic (earning over 2500 citations), write five books as an author (selling over 200,000 copies), and build a popular blog (300,000 page views last month) — all without working at nights and rarely working on weekends. The secret is my fanatic commitment to deep work.

This highlights an important point that I want to emphasize: This book isn’t a cranky screed about how kids these days spend too much time on the Facebook, and it isn’t a collection of warmed over suggestions about how you should turn off notifications on your phone and not check email first thing in the morning.

It instead calls for a radical transformation to your work life in which focusing with great intensity becomes your core activity, not an occasional indulgence.

With this in mind, the book then details specific strategies, divided among four “rules,” that you can use to accomplish this transformation — covering topics from focus training, to effective scheduling, to rituals and routines, to aggressive tactics for taming the tide of shallow obligations that constantly threaten to drown the typical knowledge worker’s day.

Give Yourself the Gift of Depth

To help you learn more about the book, I’ve included below an annotated table of contents and a link to a long excerpt.

I’m proud of this book and believe it can have an impact on how we think about work in a digital age.

Deep Work is available now at Amazon (kindle and hardcover), Audible, Barnes and Noble, IndieBound, or anywhere else books are normally sold.