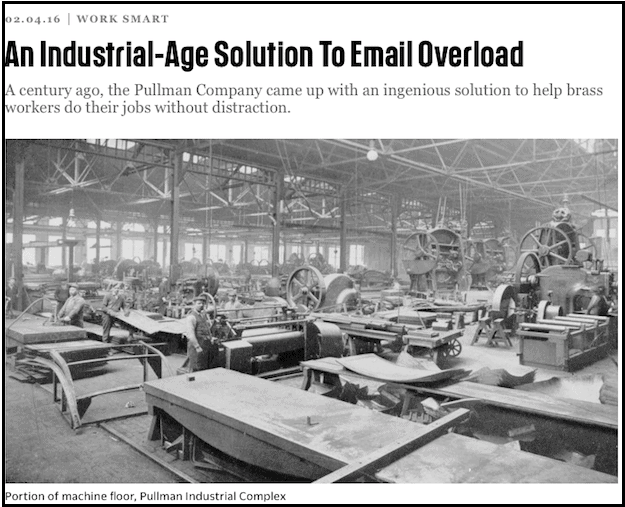 This of course is the same problem faced by many modern knowledge work organizations. We hook up to email addresses and Slack channels and then just rock n’roll with messages all day long, trying to work things out on the fly, and hoping busyness will transmute into value.

This need to constantly monitor an inbox brimming with ad hoc messages, in other words, is simply the Pullman brass workers’ dilemma magnified to a new extreme by the electronic efficiency of digital networks.

Which is all to say that we should take seriously the solution Runnells and his team successfully deployed to turn around their company’s flagging fortunes: they made communication harder and less convenient.

As I detail in the Fast Company article, among other things, Runnells hired many more managers to do nothing but handle the logistical issues that used to distract the skilled factory workers. He also barred the door to the brass works to outsiders: if you needed something, you had to fill out a relevant form and send it through a special slot for a dedicated manager to process.

Hiring the managers was expensive.

Barring the doors was inconvenient.

But it was worth it: Pullman’s profit per train car jumped by over $100.

In today’s world, we assume faster communication and more convenient collaboration will always help the bottom line. We would be smart, however, to keep in mind the lessons learned by yesterday’s business leaders: making things harder isn’t necessarily bad.