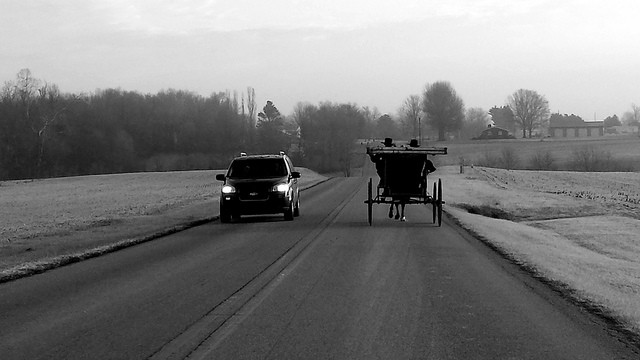 The Amish and Technology

“Amish lives are anything but anti-technological,” Kelly writes. “I have found them to be ingenious hackers and tinkers, the ultimate makers and do-it-yourselvers. They are often, surprisingly, pro-technology.”

He explains that the simple notion of the Amish as Luddites vanishes as soon as you approach a standard Amish farm. “Cruising down the road you may see an Amish kid in a straw hat and suspenders zipping by on Rollerblades.”

Some Amish communities use tractors, but only with metal wheels so they cannot drive on roads like cars. Some allow a gas-powered wheat thresher but require horses to pull the “smoking contraption.” Personal phones (cellular or household) are almost always prohibited, but many communities maintain a community phone booth.

Almost no Amish communities allow automobile ownership, but it’s common for Amish to travel in cars driven by others.

Kelly reports that both solar panels and diesel electric generators are common, but it’s usually forbidden to connect to the larger municipal power grid.

Disposable diapers are popular as are chemical fertilizers.

In one memorable passage, Kelly talks about visiting a family that uses a $400,000 computer-controlled precision milling machine to produce pneumatic parts needed by the community. The machine is run by the family’s bonnet-wearing, 10-year old daughter. It’s housed behind their horse stable.

These observations dismiss the common belief that the Amish reject any technology invented after the 19th century. So what’s really going on here?

The Amish, it turns out, do something that’s both shockingly radical and simple in our age of impulsive and complicated consumerism: they start with the things they value most, then work backwards to ask whether a given technology performs more harm than good with respect to these values.

As Kelly explains, when a new technology rolls around, there’s typically an “alpha geek” in any given Amish community that will ask the parish bishops permission to try it out. Usually the bishops will agree. The whole community will then observe this first adopter “intently,” trying to discern the ultimate impact of the technology on the things the community values most.

If this impact is deemed more negative than helpful the technology is prohibited. Otherwise it’s allowed, but usually with caveats on its use that optimize its positives and minimize its negatives.

The reason most Amish are prohibited to own cars, for example, has to do with their impact on the social fabric of the community. As Kelly explains:

“When cars first appeared at the turn of the last century, the Amish noticed that drivers would leave the community to go picnicking or sightseeing in other towns, instead of visiting family or the sick on Sundays, or patronizing local shops on Saturday. Therefore the ban on unbridled mobility was intended to make it hard to travel far and to keep energy focused in the local community. Some parishes did this with more strictness than others.”

This also explains why an Amish farmer can own a solar panel but not connect to the power grid. The problem is not electricity, it’s the fact that the grid connects them too strongly to the world outside of their local community, violating the Amish commandment to “be in the world, but not of it.”

I titled this post: Approach Technology Like the Amish. To be clear, I don’t mean that you should adopt the specific values of Amish life, as these are based primarily on their often illiberal and admittedly esoteric religious beliefs.

What I do mean, however, is that you should consider adopting their same thoughtfulness in approaching technology. The Amish are clear about what they value, and new technologies are evaluated by their impact on these values. The key is building a good life — not fretting about missing out on some minor short term pleasure or interesting diversion.

(If we held ourselves to this same standard, I suspect, many fewer people would own Apple watches.)

Later in this chapter, Kelly asks the key question: “This method works for the Amish, but can it work for the rest of us?”

I’m more confident than Kelly. I think something like this method can work for the rest of us, especially once you replace Amish values with your personal values, and the decree of your parish bishops with your own honest self-assessment.

In fact, I even have a name for such a philosophy: digital minimalism.