The Stone Carver in an Age of Computer Screens 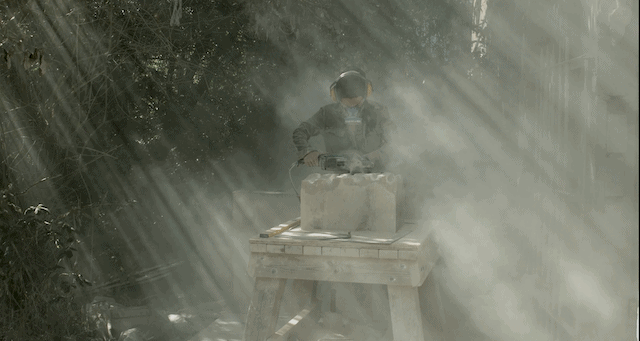 A reader recently pointed me toward a short video titled “A Continuous Shape.” It profiles Anna Rubincam, a stone carver from South London who works alone out of a utilitarian studio; sliding doors open to a tree-lined patio.

The video follows Rubincam’s efforts over three weeks to produce a stone carving of a young woman’s head. It starts with her taking measurements from a live model. These are then translated into a clay figure, and subsequently engraved, one precise chisel hit after another, into a solid chunk of stone.

The reader who sent me the video titled his message: “Epitome of deep work.” I think he’s on to something.

When you watch Rubincam in action, it’s hard not to feel an intimation of wistfulness. Something about her efforts, in which she stands alone in a minimalist chamber, and hour after hour, with hard-won skill, manifests cognitive abstractions into concrete reality, seems about right.

I think the reason portrayals of physical craft are instinctually compelling is that they present a conception of “work” that closely aligns with our species’ wiring. Part of what separated us from our primate ancestors is our ability to understand the world symbolically; allowing us to make an abstract plan that we then translate into something real. We’re rewarded for this final step with a sense of satisfaction, and punished for its absence with a sense of anxious hollowness.

When contemplating these realities, I can’t help but wonder about the psychic toll of replacing the simplicity of such craft with email, and Zoom, and half-hearted PowerPoint. As I elaborate in Digital Minimalism, a brain forged in the Paleolithic doesn’t fully understand the digital, and is easily overwhelmed by a notion of work defined by constant, unstructured, unceasing electronic pings and dings.

Late in the video, Rubincam looks to camera and explains:

“Once you’ve created something it takes up a physical space in the world and it has a permanence that will hopefully outlast you.”

Here’s to hoping that as the world of work evolves beyond its tactile foundation, we can find a way to extract similar levels of calm human contentment from our daily efforts.