In a sermon delivered at the height of World War Two, a period awash in distraction and despair, C.S. Lewis delivered a powerful claim about the cultivation of a deep life:

“We are always falling in love or quarreling, looking for jobs or fearing to lose them, getting ill and recovering, following public affairs. If we let ourselves, we shall always be waiting for some distraction or other to end before we can really get down to our work. The only people who achieve much are those who want knowledge so badly that they seek it while the conditions are still unfavorable. Favorable conditions never come.”

This quote reminds me of one my favorite Teddy Roosevelt stories, first recounted in his 1888 memoir, Ranch Life and the Hunting Trail. The tale begins in the spring, as the ice began to thaw on the Little Missouri River that passed through Roosevelt’s Elkhorn Ranch. Under the cover of night, a band of infamous local horse thieves steal a boat from the Elkhorn.

Though the swollen river was treacherous, and the thieves dangerous, there was no doubt that Roosevelt had to pursue them. “In any wild country where the power of law is little felt or heeded, and where every one has to rely upon himself for protection,” he writes, “men soon get to feel that it is in the highest degree unwise to submit to any wrong.” With the help of his ranch hands, Bill Seward and Wilmot Dow, Roosevelt builds a new flat-bottomed scow, which the trio then pushes out into the ice-choked river to initiate a three-day journey to hunt down the fugitives.

END_OF_DOCUMENT_TOKEN_TO_BE_REPLACED 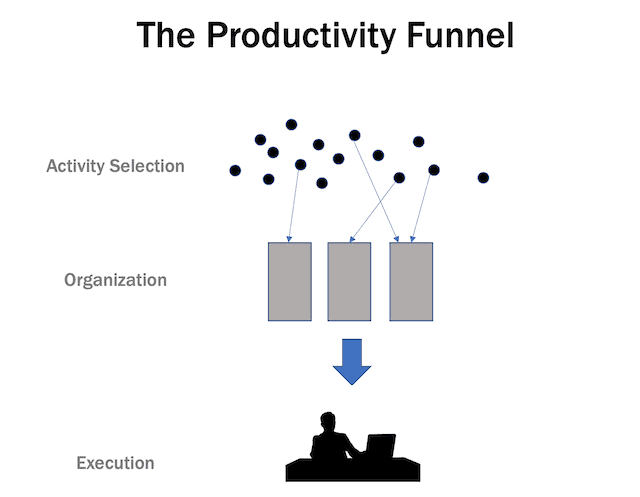 In light of our recent discussions of “productivity,” both in this newsletter and on my podcast, I thought it might be useful to provide a more formal definition of what exactly I mean when I reference this concept.

In the most general sense, productivity is about navigating from a large constellation of possible things you could be doing to the actual execution of a much smaller number of things each day.

At one extreme, you could implement this navigation haphazardly: executing, in the moment, whatever grabs your attention as interesting or unavoidably urgent. At the other extreme, you might deploy a fully geeked out, productivity pr0n-style optimized collection of tools to precisely prioritize your obligations.

To make sense of these varied journeys from a broad array of potential activity to the narrowed scope of actual execution, I often imagine the three-level funnel diagramed above.

END_OF_DOCUMENT_TOKEN_TO_BE_REPLACED

On Slow Productivity and the Anti-Busyness Revolution

Seven years ago, Alex Soojung-Kim Pang was a typical overworked, multitasking, slave to the hyperactive hive mind, Silicon Valley consultant.  Feeling the symptoms of burnout intensify, he arranged a three-month sabbatical at Microsoft Research Cambridge. Here’s how he later described this period:

“I got an enormous amount of stuff done and did an awful lot of really serious thinking, which was a great luxury, but I also had what felt like an amazingly leisurely life. I didn’t feel the constant pressure to look busy or the stress that I had when I was consulting. And it made me think that maybe we had this idea about the relationship between working hours and productivity backward. And [we should] make more time in our lives for leisure in the classic Greek sense.”

The experience led him to ultimately publish a book titled, Rest: Why You Get More Done When You Work Less. I remember this book because it came out the same year as Deep Work, and the two volumes were often paired as variations on a common emerging anti-busyness theme.

In the half-decade that has since transpired, an increasing number of new books have taken aim at our accelerating slide toward overload in both our work and our personal lives. Many of these new titles, somewhat in contrast to my writing, or that of Pang,  have adopted a more strident and polemical tone — not only underscoring the issues, but also pointing a defiant finger at the forces which are supposedly to blame. Clearly the overwhelmed and overscheduled manner in which we currently operate isn’t working.

Which brings me to a question that more and more has been capturing my attention: What can we do about this unfortunate state of affairs?