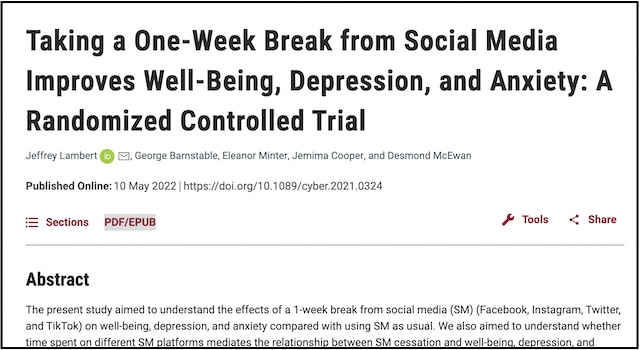 In my writing on technology and culture I try to be judicious about citing scientific studies. The issues involved in our ongoing wrangling with digital innovations are subtle and often deeply human. Attempts to exactly quantify what we’re gaining and losing through our screens can at times feel disconcertedly sterile.

All that being said, however, when I come across a particularly well-executed study that presents clear and convincing results, I do like to pass it along, as every extra substantial girder helps in our current scramble to build a structure of understanding.

Which brings me to a smart new paper, written by a team of researchers from the University of Bath, and published last week in the journal of Cyberpsychology, Behavior, and Social Networking. It’s titled “Taking a One-Week Break from Social Media Improves Well-Being, Depression, and Anxiety,” and it caught my attention, in part, because of its parsimonious design.

As I reported last fall in The New Yorker, a problem with existing research on social media and mental health is that it often depends on analyzing large existing data sets. Finding strong social psychological signals in these vast collections of measurements is tricky, as outcomes can be quite sensitive to exactly what questions are asked.

This new paper avoids these issues by deploying a gold-standard for studying human impacts: the randomized control trial. The researchers gathered 154 volunteers with a mean age of 29.6 years old. They randomly divided them into an intervention group, which was asked to stop using social media for one week (with a focus, in particular, on Facebook, Twitter, Instagram, and TikTok), and a control group which was given no instructions.

At the end of this week, the researchers found “significant between-group differences” in well-being, depression, and anxiety, with the intervention group faring much better on all three metrics. These results held even after control for baseline scores, as well as age and gender.

The researchers further found that they could obtain smaller, but still significant improvements in depression and anxiety by having users simply reduce the time they spend on Twitter and TikTok. The biggest effects, however, came from full abstention.

Caveat emptor, I don’t know these researchers, nor have I run this work by the experts I trust in the field, so I can’t vouch without equivocation for the strength of its findings. But given the simple study design and the clear effects it revealed, the message here seems to be clear: social media hurts mental health. Which motivates an obvious follow-up question: Why do we insist on still shrugging our shoulders and continuing to treat the use of these tools like some sort of unavoidable civic and professional necessity?