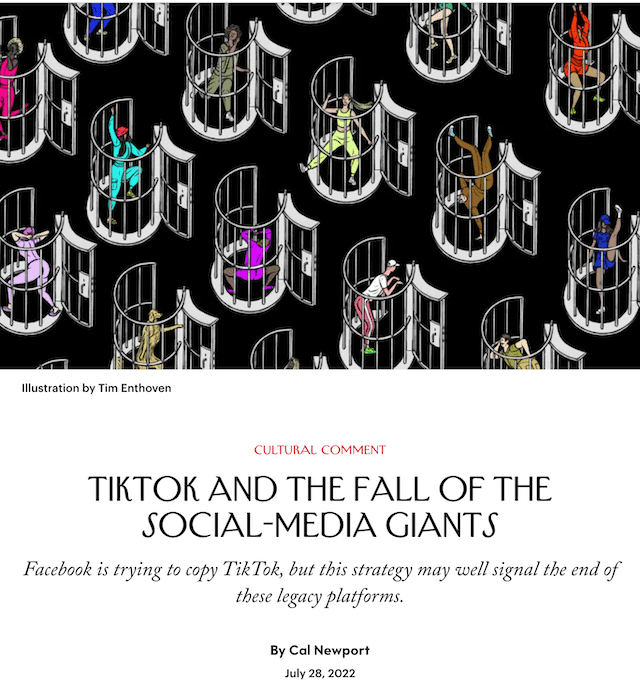 Just a few months ago, it seemed that the biggest social media news of the year would be Elon Musk’s flirtations with buying Twitter (see, for example, my article from May). Recently, however, a new story has sucked up an increasing amount of oxygen from this space: TikTok’s challenge to the legacy social platforms.

Last February, Meta, the parent company of Facebook and Instagram, released a quarterly report that revealed user growth had stalled. Analysts were quick to attribute this slow down, in part, to fierce competition from TikTok, which had recently blasted past the billion user mark. The valuation of Meta plummeted by over $200 billion in a single day.

Forced by investor pressure to respond, Meta began a sudden shift in its products’ features that moved them closer to the purified algorithmic distraction offered by its upstart rival. This spring, a leaked memo revealed Facebook’s plan to focus more on short videos and make recommendations “unconnected” to accounts that a user has already friended or followed. More recently, Instagram began experimenting with a TikTok-style full screen display, and has emphasized algorithmically-curated videos at the expense of photos shared by accounts the user follows.

The problem comes from their underlying business models. The social media giants of the last decade have cemented a pseudo-monopolistic position in the internet marketplace because they serve content based on massive social graphs, constructed in a distributed fashion by their users, one friend or follow request at a time. It’s too late now for a new service to build up a network of sufficient influence and complexity to compete with these legacy topologies.

TikTok, by contrast, doesn’t depend on this type of painstakingly accumulated social data. It instead deploys a simple but brutally effective machine learning loop onto the pool of all available videos on its platform. By observing the viewing behavior of individual users, this loop can quickly determine exactly which videos will most engage them; no friends, retweets, shares, or favorites required. The value of the TikTok experience is instead created by a unique dyadic mind meld between each user and the algorithm.

If platforms like Facebook and Instagram abandon their social graphs to pursue this cybernetic TikTok model, they’ll lose their competitive advantage. Subject, all at once, to the fierce competitive pressures of the mobile attention economy, it’s unclear whether they can survive without this protection.

As I argue in my article:

“This all points to a possible future in which social-media giants like Facebook may soon be past their long stretch of dominance. They’ll continue to chase new engagement models, leaving behind the protection of their social graphs, and in doing so eventually succumb to the new competitive pressures this introduces. TikTok, of course, is subject to these same pressures, so in this future it, too, will eventually fade. The app’s energetic embrace of shallowness makes it more likely, in the long term, to become the answer to a trivia question than a sustained cultural force. In the wake churned by these sinkings will arise new entertainments and new models for distraction, but also innovative new apps and methods for expression and interaction.”

In this prediction, I find optimism. If TikTok acts as the poison pill that finally cripples the digital dictators that for so long subjugated the web 2.0 revolution, we just might be left with more breathing room for smaller, more authentic, more human online engagements. “In the end, TikTok’s biggest legacy might be less about its current moment of world-conquering success, which will pass,” I conclude. “And more about how, by forcing social-media giants like Facebook to chase its model, it will end up liberating the social Internet.”

This future is far from guaranteed. But let’s hope it’s true…