On Vampires and Method Writing 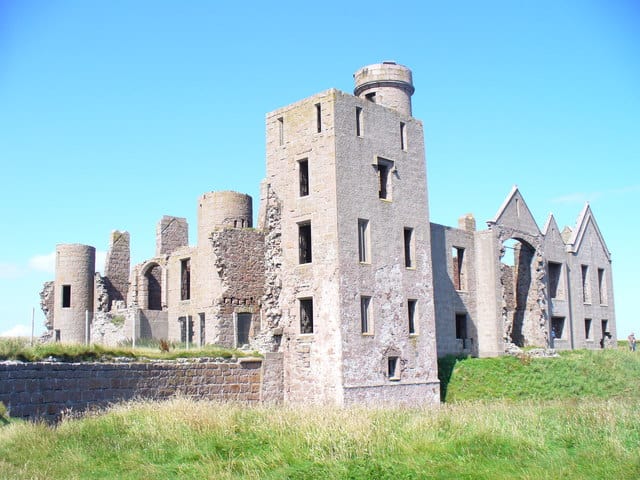 In my last dispatch, I reported on how the fantasy novelist Brandon Sanderson writes in a “supervillain lair” built twenty feet underground near his otherwise unremarkable home in suburban Utah. According to an article published last weekend in The Guardian, Sanderson is not, as it turns out, the first author to use extreme measures to generate fantastical inspiration.

In 1894, an Irish actor who was struggling to write a novel in his spare time traveled with his wife and young son to the remote Aberdeenshire coast of northeast Scotland. They stayed in The Kilmarnock Arms, an oak-paneled hotel in the center of Port Erroll, a small fishing village located near a desolate sandy beach. Most days, the actor would make the twenty-minute walk to Slains Castle (pictured above), a ruined 16th century fort situated dramatically on a seaside cliff. He was seeking inspiration for a character he was attempting to bring to life in his manuscript—a count who was hiding a horrific secret. The actor’s name was Bram Stoker, and the fictional count, of course, was to be called Dracula.

In London, Stoker had been acting alongside Henry Irving, a stage star of the era who was famous for his early embrace of what would later be known as method acting. Stoker decided to apply Irving’s approach to his novel writing. As detailed by The Guardian:

“According to his wife, Florence, everyone – including the hotel staff, and the locals – was frightened of [Stoker]. He ‘seemed to get obsessed by the spirit of the thing,’ she later said. He ‘would sit for hours, like a great bat, perched on the rocks of the shore, or wander alone up and down the sand hills thinking it all out’.”

Stoker returned to Aberdeenshire at least a dozen times in the years that followed, sometimes staying at the the Kilmarnock Arms and sometimes taking a cottage. “For Stoker, Aberdeenshire stood in for Transylvania,” explains a local historian quoted in the article. And he translated that inspiration into a memorable gothic tale.

I tell this story not because I think a method approach, in which you inhabit your characters and their behaviors, is the best way to write fiction. (If this were true, a lot more authors would take a swing at romance novels.) But instead because it’s an extreme example of a more general point that I’ve been emphasizing recently: when it comes to cognitive work, setting makes a difference.

Putting professors into stark and spacious modern offices is functional. But is it as conducive to deep thought as the fire-warmed study of the Oxford Don? Setting up your laptop on your kitchen table might technically give you access to everything you need to do your job. But will your mind end up in the same state produced by commuting to the marble-lobbied skyscraper in the city center?

It’s becoming increasingly clear that the next big innovations in knowledge work will be less about technology and tools, and more about better understanding the psychology that goes into wringing value out of thought matter.

10 thoughts on “On Vampires and Method Writing”