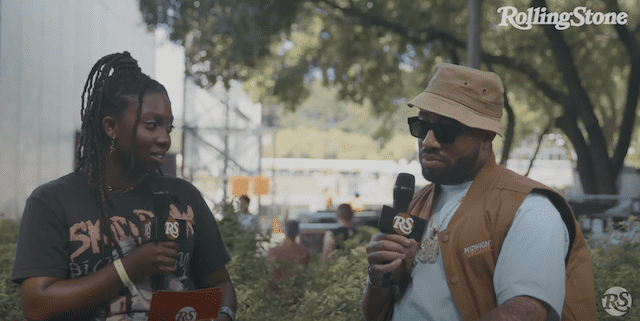 In August, a reporter from Rolling Stone sat down to interview the San Francisco-based rapper Larry June before he took the stage at Lollapalooza in Chicago.

June is known for his status as an independent artist. After an early deal with Warner Brothers fizzled, June went on to produce and release almost all of his subsequent work without support from a major label. He’s also known for his productivity. June has released 10 albums since 2018, with his most recent, last summer’s Spaceships on the Blade, reaching number 39 on the Billboard 200. In addition to these projects, June has released 5 collaborative albums, 4 EPs, 5 Mixtapes, and made appearances as a guest artist on singles from artists like Post Malone.

It’s this latter reputation, as an artist who ships original work at a fast pace, that makes what June admitted to the Rolling Stone reporter so surprising:

“Since we’re on Rolling Stone, I’ve go to let y’all know, that for everybody that wants to feature: I only rap three hours a day. You know what I’m saying? I only rap three hours a day. I get in the studio at 6 o’clock and I’m done around 9 o’clock in the morning…I don’t really like rapping too long. It gives me anxiety. I feel energy, I’m in the studio, I knock it done right there.”

As the music producer who originally sent me this clip emphasized, this slow but steady pace is unusual in the industry. “Rappers are notorious for claiming to live in the studio, brag about never sleeping, working 12-16 hrs a day,” he told me. But as June elaborates to the reporter, his technique works because of the miracle of compounding achievement:

“It might take me 3 hours to do one song, I might like just do the intro…and then the next day [record some more]….the thing though is consistency…If I do only 3 hours a day, every day, for 365 days, I just did outstanding numbers.”

Don’t underestimate the power of this productivity arithmetic. During 2020 alone, when June found himself isolated at home due to the coronavirus pandemic, recording each day, free from distraction, in his basement recording booth, he finished six different projects.

In this interview clip, we find a classic example of slow productivity. Spending 16 hours in the studio feels “productive” in an exhausting, performative sense. Retreating to your basement for only a few hours each morning seems somehow diminished by comparison. But as June’s success unambiguously illustrates, accomplishment is often best measured on the scale of years not days, and when you zoom out to this grander level, the advantages of a focused slowness become hard to ignore.